Click here to listen to 🤘 On the Wavelength🤘 an audio experience about FRQNCY Media.

Inside the Mind of Our Lead Podcast Strategist

We’d like to introduce you to Jessica Olivier, our Lead Content Strategist. Jessica has been an invaluable part of FRQNCY since its earliest days, when she worked in tandem with Michelle to design our signature approach to concepting podcasts rooted in deep research and ideation (🤯). She is a wealth of insight for anyone looking to concept a podcast that stands out from the millions already out there. To be in Jessica’s presence is to bathe in a light so bright and pure it could be illegal; to work with her is to be guided by a brilliant and relentlessly uplifting supernova. Alright, before we go overboard (too late?), let’s meet this pun-wielding, encouragement-showering, idea-generating force of a woman.

You studied acting at the American Academy of Dramatic Arts in New York City, and film and video at Georgia State University. If podcasting had been offered as a major when you were in school, do you think you would’ve studied it instead?

I have to imagine the musical theatre nerd within me would jump at the opportunity to learn a medium that harnesses the powerful sound of the human voice to tell impactful stories. But I’m not sure I would have studied it instead of theatre or film, I would have probably just found a way to add another major to my plate or something. I studied at multiple schools–the University of Georgia, the American Academy of Dramatic Arts, and Georgia State University–because I couldn’t seem to slow my hunger to keep moving and learning. Bless my poor parents. They were on the receiving end of many calls that began with, “I think I need to go to a different school now and pursue….(insert some sort of creative path).” Huge shoutout to them for being absolutely supportive every single time.

In the film and television industry, you worked on major productions such as The Vampire Diaries and the Emmy winning Years of Living Dangerously. What’s one of the biggest differences between working in film/TV versus podcasting?

Production is such a fun and creative space, regardless of the medium. But when it comes to television and film production, there is a pretty standard procedure as far as crew positions, scripting, and processes. The medium of podcasting is exciting because it’s still so new that the possibilities are endless. It hasn’t been around long enough to be fully standardized. We are witnessing podcasts start to truly flex their creativity, pushing concepts and formats way outside of the box. And, really, as young as podcasting is, there isn’t even a firmly established box to think outside of. Btw, runners up for this answer are that: 2) there is room for everyone’s perspective and story in podcasting, regardless of how niche and 3) the uniquely intimate experience podcasts offer their audience.

As FRQNCY’s lead content strategist, you take super deep dives into clients’ podcast potential. What’s your safety tip  for someone embarking into a long night of podcast-related research?

Oh buddy. Whatever you do, don’t look at the time. Ignore the existence of time completely, in fact. But once you surface from a super deep-dive wormhole, detach completely and do something physical to help process all the information you just took on. A post-research wormhole walk will usually help me transition from intake mode to ideation mode.

As adult theater kids, you and Michelle have been known to break out into spontaneous productions during team meetings. No question here… Just letting the people know.

Outside of work-related endeavours, what are your weirdest hobbies and interests?

You knew to ask about weird interests specifically, huh? I’d start with traveling but I think that’s on 99% of Millennials’ lists. So what else… I enjoy absurdly long walks (like, uh oh, I walked out the door in a pair of sandals and ended up 9 miles from home), writing and reading poetry, all things holidays and festivities–especially Christmas–the occasional existential panic, cooking vegan recipes, my fav hip-hop dance class, and intense forms of cathartic exercise. Michelle can vouch for the fact that I like to rescue wildlife or homeless pets, whether they actually need rescuing or not (like, oops, that turtle I pulled over to rescue is a tied up trash bag). Oh! And believe it or not, when I’m not researching and wormholing for FRQNCY…I like to research and wormhole for…fun. Gulp.

If your sons, Jasper and Felix, had podcasts, what would your recommended strategy be? Bonus points if you include potential names.

Honestly, Jasper and I talk about his different podcast ideas frequently. I think he could have a very successful podcast right now at age 4. If he gives me the thumbs up, it’s on. Jasper’s podcasts would be narrative interview format, so the listener could really get to know his unique perspective and his loveable charm. The overarching subject would be an exploration of engineering and inventions, as he loves learning about that. Loyal listeners would pick up on the subtextual questions framed within the broader topic, and those questions would all be deeply philosophical. The episodes would need to be shorter, since recording sessions would obviously take place during Felix’s nap time.

Felix’s podcast would be a fiction comedy podcast, with all sorts of imaginative and creative characters that interact in a very complex set of storylines. The dialogue would be filled with witty one-liners and acute references that appease his intelligentsia following. It’s going to be quite the production lift, so we will start with a six-episode pilot season. The fame might temporarily change Felix, but he will find his way back to the ground, y’all.

If you were stranded on an island with access to only one podcast, what would it be?

I have listened to 246 podcasts in the last couple of months researching concepts for clients. Between those and having a 3- and 4-year old at home, I have little time for bonus pleasure listening. But honestly? You could bring anything from the FRQNCY lineup to my ol’ deserted island and I would be oh-so happy. I’m really proud of our work.

Paige McCauley is FRQNCY Media’s digital marketing maven and resident musical wunderkind. Paige has a long history with the power of sound as an award-winning recording artist and songwriter, performing at venues like The Fox Theatre, House of Blues in West Hollywood, and the Mercedes-Benz Superdome. She also has extensive experience in the music industry, interning for the Recording Academy and working with artists like Billie Eilish, Travis Scott, and Brandi Carlile during her time in college. 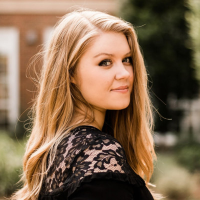 Paige McCauley is FRQNCY Media's digital marketing maven and resident musical wunderkind. Paige has a long history with the power of sound as an award-winning recording artist and songwriter, performing at venues like The Fox Theatre, House of Blues in West Hollywood, and the Mercedes-Benz Superdome. She also has extensive experience in the music industry, interning for the Recording Academy and working with artists like Billie Eilish, Travis Scott, and Brandi Carlile during her time in college.

Lead Time FTW: Why Consistency is Key to a Successful Podcast

More From the Blog

We've all heard this adage before - consistency is

The Importance of Lead Time. Struggling with consi

📣 HIRING ALERT 📣 We are looking for a freel

FRQNCY Media is a first-of-its-kind podcast production and audio innovation company founded by entrepreneur and podcaster Michelle Khouri. Since its founding in 2018, FRQNCY has produced podcasts for The Coca-Cola Company, Apple, Diane von Furstenberg, SalesLoft, and more.