Click here to listen to 🤘 On the Wavelength🤘 an audio experience about FRQNCY Media.

In 2018, FRQNCY Media existed mostly in the rows of a spreadsheet. I remember the contracts that trickled out during the months that followed, each offering a glimmer of hope that this crazy idea might just work.

A podcast production company is nothing new – but one that has the gall to produce high-quality podcasts for a thought leader, a nonprofit, and a Fortune 100 company with the same level of care and service? One that manages to package podcast production sustainably and profitably? Those are wild ideas. And those wild ideas are what make FRQNCY Media a first-of-its-kind business model.

In 2019, our first full calendar year in business, FRQNCY Media became a fully formed company and proved itself in more than one way.

We proved that we could bring high-quality and intentional podcast production to all kinds of podcasters.

In 2019, we worked with everyone from individual creators to some of the largest brands in the world. We produced Total Refresh for The Coca-Cola Company and Hidden Voices for the Georgia Council on Developmental Disabilities. We worked alongside Diane von Furstenberg on Raising the Torch for Apple and the Statue of Liberty-Ellis Island Foundation. We brought full-time mom Erin Gendron’s idea of a philosophical podcast about parenthood to life, and concepted a live tour experience for the incomparable Unladylike podcast. On FRQNCY’s Wavelength, the size of the client doesn’t make them more or less deserving of an expert and dedicated production partner. By committing ourselves to serving every kind of podcaster with high-quality and intentional podcast production, we broke barriers when we opened our doors.

We proved to be profitable and in-demand.

In 2019, FRQNCY Media signed over $525,000 in contracts and brought on 14 new clients, including 2 Fortune 100s. We worked with clients across the East Coast, and ran productions in four major U.S. metropolitan areas in one week. I spoke about podcasting at two national conferences, one for AAJA and the other for ShePodcasts. Most importantly, we proved that you can be a profitable business while also remaining transparent, honest, and fairly priced.

We proved that sound can heal, enlighten, and uplift.

In 2019, FRQNCY Media launched 7 podcasts, all of which add something positive to our world. More specifically:

Raising the Torch reminds us of the importance of safe harbors and symbols of democracy, while also embracing the holistic and somewhat problematic history of the Statue of Liberty through the voices of three diverse historians.

Hidden Voices is driving advocacy and awareness for Georgia residents with developmental disabilities by featuring the voices of those residents. It is living the credo “Nothing about us without us.”

Total Refresh puts The Coca-Cola Company’s North American (CCNA) employees at the forefront as the company navigates one of the biggest strategic shifts in its 132-year history. As a production team, we pushed CCNA executives to have authentic, raw, and human conversations that have increased employee confidence and trust in their leaders.

We proved that you don’t need investor dollars to grow quickly.

When the news first broke about FRQNCY Media, I announced that I would be building a community hub for podcasters in Atlanta. I assumed, as many founders do, that the only way to bring something this big into existence was with investors in tow. I pitched to one investor after another while FRQNCY grew organically and independently. I took a big leap in May 2019 when I decided to fund FRQNCY Media on my own (AKA “bootstrap” it), which would mean slower, more intentional growth.

With investment, we would have scaled rapidly and opened the doors to our physical space much more quickly. But we likely would have sacrificed the extraordinary company culture we now have – the kind of culture that comes only after patient simmering, intentional values-setting, and steady collaboration. We onboarded a new editor at the beginning of January 2020. As we discussed FRQNCY’s six core values, I asked if anyone had something to add. Becca Godwin, who provides executive and content support, chimed in: “Some of this may seem too good to be true, but believe me, it’s not. A lot of us have had to unlearn the old fears and behaviors from our past jobs. We really do live these values every day.”

That kind of magic is worth slowing down for.

FRQNCY’s core team (the FRQNCY Fam) is now comprised of seven impressive humans, and our extended Fam brings us to a team of 12-15, depending on the production cycle. Every single person on the core team has grown their hours as well as their long-term vision for their role at FRQNCY. With this solid foundation in place, 2020 is our year to grow swiftly.

The future is bright for FRQNCY Media.

It’s surreal to think about how much we’ve accomplished in one short year – and how much more remains to be done. 2020 has a lot in store for FRQNCY Media. We hope to open the first iteration of our community hub, continue growing our production packages, and bring on full-service clients that allow us to flex our wildest production fantasies. I hope you’ll stay tuned as we continue causing ripples.

Happy new year and cheers to a pod-filled decade. 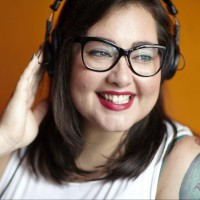 Frequently Thought Questions: Because we think we know what you’re thinking

More From the Blog

We've all heard this adage before - consistency is

The Importance of Lead Time. Struggling with consi

📣 HIRING ALERT 📣 We are looking for a freel

FRQNCY Media is a first-of-its-kind podcast production and audio innovation company founded by entrepreneur and podcaster Michelle Khouri. Since its founding in 2018, FRQNCY has produced podcasts for The Coca-Cola Company, Apple, Diane von Furstenberg, SalesLoft, and more.